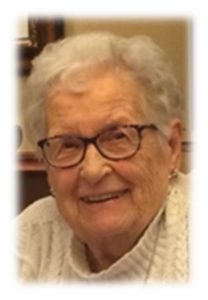 Helen’s story began on November 15, 1923. Born in Port Washington, WI and raised on a farm in Fredonia, WI. She was the only child of John “Jack” Nicholas Paulus and Rosalie (nee Hiltgen) Paulus. As a teenager the farm was sold due to the highway expansion, and the family moved into town. Her Uncle Leo and Aunt Leona Hiltgen owned Hiltgen’s Tap in Fredonia. They would open the dance hall for roller skating and this is where she met her future husband, Donald J. Ziehr. They were quite a pair on skates as they could dance on those old-time, 4 wheeled devices.

Helen learned to play piano at an early age. Her dad played piano and sang tenor. She loved to listen to him sing.

In the spring of 1945, Helen graduated with a degree from Miseracordia School of Nursing in Milwaukee, WI. Helen was proud to wear her crisp white uniform, white nylons and starched nursing hat with its one black stripe. During her nursing career she worked as a hospital nurse and then a clinical nurse after the birth of her children.

On August 4, 1945 Don and Helen were married at St. Rose of Lima Catholic Church in Fredonia. They moved to Milwaukee for Don’s job at Allis Chalmers where they built their first house. There she gave birth to 4 children: Richard, Patricia, Frances and Michael.

While living in Menomonee Falls and raising their family, they purchased a ski boat. Interestingly, neither of them could swim very well. They had made sure that their children were all good swimmers and then went on to take them water skiing. Eventually the boat was sold in favor of a backyard pool.

Even as a mother and nurse, Helen found time to sew & knit doll clothes, can the bounty of the gardens, sew clothes for her children & grandchildren, play bridge and make quilts which are still in use. She also always enjoyed live theater, especially musicals. She and Don attended many a performance at various venues. She was also a fan of country music and old time tunes (as she called it). “Let Me Call You Sweetheart” was her favorite.

After her children were grown Helen and Don sought out volunteer assignments. They became court appointed guardians for two individuals in need. They also volunteered at a food kitchen for those in need of a meal and for a few years were in charge of the huge rummage sale at their church, St. Frances Cabrini.

As her body slowed down, Helen became an avid player of solitaire on her computer, working on word finds, reading and continuing to knit. Her latest project was fingerless gloves.

Helen’s favorite flower has always been the gardenia. She requested this flower in all corsages and bouquets from prom to her funeral.

Towards the end of her life she sold her home and moved into New Perspectives Assisted Living in West Bend, WI. Her final days were spent in Betty’s Harbor due to her needs.

Loved ones who cleared the path for her transition include her parents (of course), her husband of 64 years, and her youngest son Michael John who died at the age of 36.

And so the story continues through her children: Richard (Joan) Ziehr of Madison, WI, Patricia (Patrick) Niles of Grafton, WI, and Frances (Michael – deceased) Vandre of Watertown, WI; 10 grandchildren and 18 great grandchildren, other relatives and friends. Until we meet again. We love you, will miss you and will celebrate your life through our stories.

In lieu of flowers please consider making a donation to Season’s Hospice (6737 W. Washington Street Suite 2150; West Allis, WI 53214) or a charity of your choice in Helen’s name.