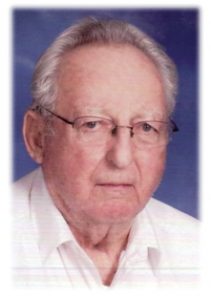 Vincent J. “Vince” Weyker, age 91, of the town of Port Washington, WI passed away peacefully Thursday, August 1, 2019 surrounded by his family at the Harbor Club in Port Washington, where he has resided the past three years.

He was born on May 3, 1928 on the family farm to Peter and Clara Strauss Weyker, graduating from Port Washington High School, class of 1946. On October 15, 1949, Vince married Sylvia L. Watry of Fredonia at St. Mary’s Catholic Church in Port Washington.

For more than 18 years, Vince worked at Harnischfeger Homes in Port Washington. Upon its closing he moved to Simplicity Manufacturing Company where he was Maintenance Foreman for 26 years; retiring in 1991.

Vince was a good hearted, social, hard working man. He always had time to chat with people, especially some Luxembourgish with his old-time friends. He and his wife loved to dance and play cards. Together they enjoyed many winters in Florida with their friends. The Weyker’s were members of the “We Love to Dance Club” and the “Wisconsin Polka Boosters” for many years.

Vince is preceded in death by his sisters Agnes Kultgen, Mildred Schuh and Mary Ellen Mueller, his brother Stanley Weyker and sister-in-law Virginia and her husband Harold Thiel.

Memorials to the parish appreciated.

A warm and heartfelt “Thank You” to the staff of the Harbor Club for the care and kindness over the years, the fellow residents for their friendship and the nurses of Aurora Home Care Hospice for their compassion and care.