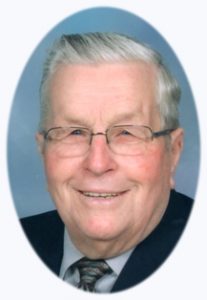 Bertram “Bert” F. Wester, of Port Washington, Wisconsin, was called home to his loving God on Saturday, July 16, 2016, at Aurora Medical Center in Grafton. He was 92 years old. Bert was born in the Town of Belgium, Ozaukee County, Wisconsin, to Aloys and Rose (Ansay) Wester on May 18, 1924. He attended St. Mary’s School in Lake Church and Port Washington High School and was employed on the Wester family farm and at The Krier Preserving Company in Belgium.

On July 22, 1942, he enlisted in the United States Army Air Corps. to serve his beloved country in World War II. He proudly served for four years primarily in India, Burma and Bangladesh and was honorably discharged on March 16, 1946.

A few months later, on June 29, 1946, he married the love of his life, Verena Burmesch, at Holy Cross Church, Holy Cross, Wisconsin. Their first official date was the night before Bert left for service so their courting took place through letters. Bert and Verena recently celebrated their 70th wedding anniversary.

Following their marriage, Bert and Verena farmed the Burmesch family farm near Holy Cross until 1950 when Bert took a job with the Ozaukee County Highway Department and the family moved to Belgium. Bert was employed by the Highway Department for 36 years. He also served as the Village Clerk for Belgium for 16 years. Bert and Verena were co-founders of the American Legion and its Auxiliary in both Fredonia and Belgium. Bert volunteered as a Boy Scout leader locally and at the district level, was a member of the Belgium Fire Department, the Belgium Lions Club, an usher at St. Mary’s Church in Belgium and later in Port Washington, and was a member of the Catholic Knights and Catholic Order of Foresters. Bert was currently a member of St. John XXIII Parish – St. Peter’s Church in Port Washington.

Always proud of his Luxembourg heritage, Bert spoke impeccable Luxembourgish and traveled to Luxembourg three times. He was a proud member of the Luxembourg Society of Wisconsin and the Luxembourg American Cultural Society. His life was lived focused on family, faith, heritage and community.

Mass of Christian Burial will be celebrated at St. John XXIII Parish at St. Peter of Alcantara Catholic Church, 1800 N. Wisconsin Street, Port Washington on Wednesday, July 20, 2016 at 6:30 p.m. preceded by visitation at the church beginning at 3:00 p.m. and with a Rosary at 3:00 p.m. Reverend Patrick Wendt will be the celebrant. Final interment will take place at St. Mary’s Cemetery in Lake Church, town of Belgium with military honors.