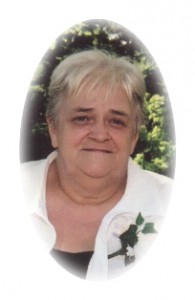 Margaret R. Tetley, “Maggie”, age 72, of Diane Drive in Newburg, WI passed away in the early morning hours of Monday, March 30, 2015 at Lawlis Family Hospice in Mequon where she had been briefly.

She was born on June 14, 1942, daughter of frank and Joyce Springer Schneider in Park Falls, WI. One of sixteen children, Margaret would later move to Milwaukee. She married Robert Tetley of Milwaukee in 1966 and raised her family there.

For a time, the Tetley’s moved to Texas. Upon returning to Wisconsin, Margaret went to school to obtain her nursing degree. For many years, she was a registered nurse for area nursing homes.

In early 2002, Margaret moved to Port Washington to live with her daughter. More recently she had lived in Newburg.

She was always the “family glue” being the center for her children and grandchildren. Margaret enjoyed making crafts, working her puzzles and puzzle books. She loved to read, generally having a few novels going at one time.

Margaret is survived by her husband Robert of Port Washington; her children Ron Tetley of Port Washington, Carrie (Philip) Bowdish of South Milwaukee and Michelle Tetley of Port Washington; 10 grandchildren, 7 great-grandchildren, her two sisters Joyce (Glen) Scherwinski of Park Falls and Carol Schneider of Waupaca; her three brothers Art (Kathy), Gene (Ellen), Dick (Barb) and George (Kathy) Schneider, all of Park Falls; further survived by nieces, nephews, other relatives and friends. She is preceded in death by her son Robert “Bobby” Tetley, Jr. and her nine siblings.

Family services will be held at a later date.