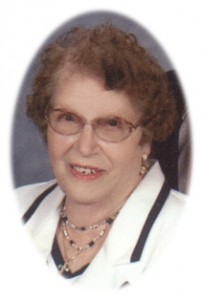 Sylvia C. Eischen, age 92, of Pierre Lane, Port Washington died unexpectedly Thursday, April 9, 2015 at her home where she has lived since 1973.

She was born on November 13, 1922 in Port Washington; daughter of John B. and Esther Schultz Watry. On May 5, 1945, Sylvia married Jerome J. “Jerry” Eischen of Dacada at St. Mary’s Catholic Church in Port Washington. The Eischens lived in Random Lake for many years, later building their home on Pierre Lane in 1972. Jerry preceded her in death on August 23, 2009.

Sylvia was a hands-on person, putting family first. Her strong will and fortitude served her well. Family time spent at the cabin up north or taking the grandchildren to the beach at Random Lake will be treasured. She had been a waitress at the former Lighthouse Restaurant in Port Washington and the former Chippewa Restaurant in Random Lake, amongst other factory jobs. She liked to collect owls and angels.

Jerry was the love of her life; they made a great team. Together, for many years, they enjoyed Sunday dancing at the former Weiler’s in Port Washington and other socials such as those held in Kewauskum, Kiel and Johnsonville. Their friendships lasted a lifetime.

She is preceded in death by her husband Jerry, her son Tim, her sisters Odaina Nassett, Sulvina Behling, Ovila Hassley and Sedonia Williams and her brother Sylvester Watry.