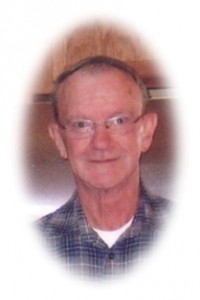 He was born on January 22, 1936, son of Donald and Coletta Mehring Tenpenny in Elkhorn, WI.  As a young boy, they moved to Port Washington. Jim graduated from Port Washington High School in 1954.

On July 11, 1964, he married Delores Prom of Port Washington.  For over 40 years, Jim was a welder at the Bolens Manufacturing Company in Port Washington, retiring in 1997.  In the late 1970’s, they moved to County Highway KK.  He was an avid bowler, golfed in league at the Port Washington Country Club and Squires Golf Club.  He tended bar at Buczek’s Columbia Bar and Grill.  Jim enjoyed playing cards, sharing a beer or two with family and friends and always kept busy.  After retirement, Jim made deliveries for Biever/Kissinger Appliance of Port Washington for a few years.

He was a longtime usher for St. Mary’s Parish and a member of the Loyal Order of Moose Lodge #1043 of Saukville.  Time was spent doing his woodworking projects for family and friends or anything else in his workshop.

He is preceded in death by his son Donald Tenpenny and his sister Lois (the late Donald “Dunc’) Rosewitz.

Mass of Christian Burial will be celebrated at 6:30PM Wednesday, April 20, 2016 at St. Peter of Alcantara Catholic Church, 1802 N. Wisconsin Street, Port Washington.  Reverend Patrick Wendt will be the celebrant.  Interment will take place at St. Mary’s Cemetery, Port Washington.  Visitation will be from 4-6:15PM Wednesday prior to the Mass AT CHURCH with a rosary at 4PM.