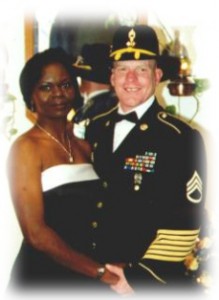 Tony J. Hall, age 54, of Chambersburg, PA, formerly of Grafton, WI, passed away Sunday, April 3, 2016 at the Chambersburg Hospital due to complications of an accident.

Tony entered the United States Army, stationed in Arizona, Germany, Maryland, South Korea and Texas; retiring after 22 years as a Staff Sergeant.  He served in Iraq during the Iraqi War in the early 1990’s.

On July 28, 1984, Tony married Ella Walker of Savannah, GA at Fort Huachuca in Arizona.  He was last employed as a contractor, working under Hewlett Packard Corp. at the Letterkenny Army Depot where he worked as a Network Security Manager.  He was a former member of Detrich-Brechbill Post 612 American Legion in St. Thomas, PA.  Tony was an avid sports fan, with the Green Bay Packers being his #1 obsession.

Tony is survived by his wife Ella; two sons, Ronald Walker and wife Clorice of Chambersburg, PA and Shawn Budgett and wife Janell of Smithsburg, MD; nine grandchildren Mykeyma, Zenaisia, Myaisa, Ronald Jr., Anthony, Kaitlyn, Michael, Corey and Ella; his mother Camille Nawrocki of Cedarburg; two brothers Nate Hall and wife Anne of Grafton and Kyle Hall of DeForest; a sister Conny Schmit and husband Randy of the town of Grafton; four nephews and three nieces, other relatives and friends.  In addition to his father, Tony was preceded in death by a brother John Hall and a sister Kitty Hall-Regan.

Funeral Services will be held at 11AM Saturday, April 9, 2016 in the Chapel of Thomas L. Geisel Funeral Home, 333 Falling Spring Rd. Chambersburg, PA.  Rev. Joe Pickens will officiate. The Family will receive friends from 6-8PM Friday at the funeral home.

A Prayer Service will be held at 1PM Wednesday, April 13, 2016 at the POOLE FUNERAL HOME/Crematory, 203 N. Wisconsin St. Port Washington, WI. Father Mike Barrett of St. Joseph Catholic Church will preside.  The Family will receive friends from 11AM-1PM Wednesday at the funeral home prior to the service.

Burial will take place after the service with military honors at Opitz Cemetery, Mequon, WI.