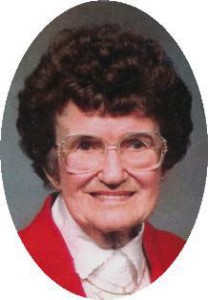 She was born July 22, 1914 in Port Washington to John and Mary Gasar Gasser.  On April 8, 1931 she married Earl Stieg, also of Port Washington.  She worked as a nurses assistant at the former St. Alphonsus Hospital in Port Washington.  Working in all the wards including Pediatrics, Orthepedics and Geriatric for 42 years, she retired in 1984 when she was 70 years old.  She was a member of St. Mary’s Church and it’s Christian Mothers and the Port Washington Senior Center.  Her husband Earl preceded her in death April 9, 1973.  In 2006 she moved to Sheboygan to live with her daughter and more recently moved to Harmony House.