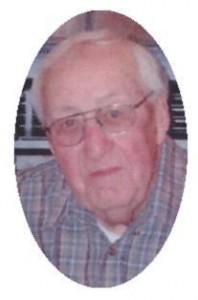 He was born February 24, 1919 in Dorchester, Wisconsin to Paul J. and Linda A. Anderson Ziehr. He graduated from Port Washington High School in 1936.  He was a first Lieutenant in the United States Army during World War Two. On August 4, 1945 he married Helen Paulus of Fredonia, Wisconsin at St. Rose of Lima Catholic Church in Fredonia.

After their marriage, they lived in Fredonia. Don graduated from Marquette University in Milwaukee in 1948 and received his registered electrical engineering certificate in June of 1968. He worked as an electrical engineer for the former Allis Chalmers and later Siemens of Milwaukee for over 35 years, retiring in 1983. In 1986 they moved to West Bend. Don was a 20 year member American Legion Post 36, West Bend and a 3rd degree Knights of Columbus Council 1964, West Bend. He enjoyed refinishing furniture and was dedicated to family geneology, organizing his complete family history going way, way back