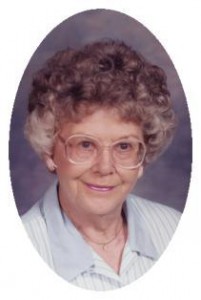 She was born July 19, 1922 in Milwaukee, Wisconsin to frederick and Ella Koplin Roets. On October 4, 1941 she married Gilbert L. Miller of Split Rock, Wisconsin in St. Charles, Missouri. She worked at the former Hanson Glove Company in Milwaukee. The couple moved to Port Washington from Milwaukee in 1951 and resided on Roger Street and she began working for the former Badger Outerwear until it closed. She was a member of First Congregational Church and was active in various aspects with the Church Ladies and luncheons. She enjoyed gardening and sewing and was also active with Meals on Wheels and the Port Washington Food Pantry. Her husband Gilbert preceded her in death January 9, 1991 and she moved to New Berlin to be closer to her daughter in September 2008.