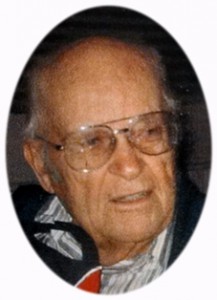 Raymond H. (Ray) Schwengel passed away at the Cedar Bay assisted living residences in West Bend, WI on Monday, June 22, 2015 at the age of 99 years. He was born to Fred H. and Anna (Ballbach) Schwengel on September 8, 1915 in Port Washington, WI.

After Ray graduated from Port Washington High School in 1933, he joined the Civil Conservation Corps. (CCC). In 1936, Ray and three of his friends motored all the way to California on their Harley Davidson motorcycles.

On December 10, 1938, Ray married Edith Ann Holt of Port Washington at St. Mary’s Church in Port Washington. Their marriage was blessed with three sons. In 1945, Ray was drafted in the US Army. Because he spoke German, Ray was assigned to Germany; serving as a Special Agent with the Counter Intelligence Corps. When he returned, Ray and Edith built a home on their acreage along the Milwaukee River in the Town of Saukville, where they lived for over 40 years.

In the 1960’s, Ray started Schwengel Manufacturing Corporation in Grafton; specializing in custom machining. For seven years, Ray served as chairman of the Town of Saukville. He went deer hunting every year in the Nicolet National Forest, elk hunting out west and enjoyed as many fishing trips to Canada as he could fit into his schedule. He and Edith did several trips around the country in their Winnebago.

On December 5, 1978, Edith passed away, but he continued his country-wide travels. In 2010, Ray returned to Wisconsin to live with his son until a bout of pneumonia sent him to Cedar Bay. The loss of his sight did not prevent him from sharing vivid descriptions of his adventures with all who visited him.

He was preceded by his wife Edith and his youngest brother Alfred.

Memorial Funeral Services 11AM Friday June 26, 2015 at the POOLE FUNERAL HOME, 203 N Wisconsin Street, Port Washington, WI. The Reverend Tom Fleischmann will officiate. Interment St. Mary’s Cemetery in Saukville. Family will receive friends from 10-11AM Friday prior to the service.

Memorials to the charity of your choice appreciated.