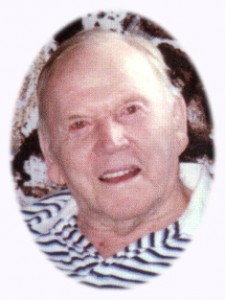 William E. “Bill” Werner, age 92, of Saukville and Amberg, Wisconsin, died Friday, May 29, 2015 at the Harbor Cove in Port Washington where he has resided the past year.

He was born on the family homestead in Amberg, WI on March 17, 1923, the youngest of eleven children to Wilhelm and Freda Hacker Werner.  In his youth, Bill worked as a logger, later marrying Rita Meitz of Daggett, MI.  He took a job with Plankinton Packing Company in Milwaukee.  For many years, Bill drove truck for LCL Transit Company in Milwaukee, delivering meat and candies to local grocery stores.

The Werners lived many years on Linden Street in Saukville.  Rita preceded him in death on May 18, 1975.  On June 10, 1978, Bill married Eleanore G. Thielke Grady of Grafton at St. Peter’s United Church of Christ in Saukville.  Later in 1979, he retired driving truck and the following year they moved to Wausaukee.

Bill just loved being back up north.  He enjoyed hunting, tending to his land and garden, cutting wood and especially horse pulls.  They returned south in 2014.

He is survived by his wife Ellie of Port Washington, his children Bill (Diane) Werner of Sheboygan, Virginia (John) Donner of Dousman, Roy (Rita) Werner of Plymouth, Jeannette (the late Willie) Mueller of Saukville, Vicki (Robert) Kertscher of Milwaukee and Tim (Cathy) Werner of Saukville; 16 grandchildren, 27 great-grandchildren, 7 great-great grandchildren, 1 great-great-great granddaughter, his sister Martha (the late Vincent) Baye of Amberg, daughter-in-law Sue Werner of Sheboygan, brothers-in-law LeRoy (the late Marjorie) Thielke of Port Washington and Kenneth Thielke of Kentucky, nieces, nephews, other relatives and friends. He is preceded in death by his wife Rita, sons Richard “Dickie” Werner and Scott “Pots” Werner, as well as, 1 sister and 8 brothers.

Bill’s funeral service will be held at 6:30PM Monday, June 1, 2015 at the POOLE FUNERAL HOME, 203 N. Wisconsin St., Port Washington.  Pastor Brian Damrow of St. Peter’s United Church of Christ, Saukville will officiate. Visitation will take place from 4-6:30PM Monday prior to the service.  Interment will take place at Amberg Cemetery, Amberg, WI. Memorials to the charity of your choice appreciated.