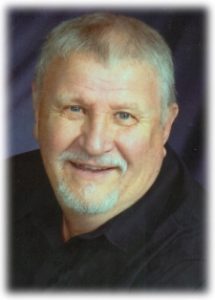 He was born June 20, 1943 in Port Washington, WI and grew up in the town of Grafton; son of Herbert O. and Lucille Viesselmann Schmalz. Ken was the oldest of five brothers.

He graduated from Grafton High School in 1961. In his youth, Ken and his brothers tinkered with cars and other machinery. He became very handy. Ken worked some construction jobs and did some factory work. For quite a few years, Ken was a butcher at the former Dohr’s Meat Market in Grafton. He would later take a job washing windows for Economy Window Cleaners of Cedarburg from which he would retire from a few years ago.

Ken was an easy going, sociable guy. He played and coached Rec. Softball in Grafton and Port Washington. He enjoyed breakfast socializing every Thursday morning with the guys; going up north deer hunting or the off-road races at Crandon; Florida vacations with his wife or putting on the miles on their motorcycles with friends throughout the United States.

Close to home, Ken was very active at Christ the King Lutheran Church. He was on the Church Board, tending to the building on a weekly basis or just to stop in for a chat. Good thing he lived close by.

He is survived by his wife of 51 years, Janis; his children Wendi (Mike) Brue of Hubertus and Corey (Amy) Schmalz of Port Washington; grandchildren Logan, Brodi, Tyler and Kendyl; his brothers Don (Martie) Schmalz of Fond du Lac, Chuck (the late Donna) Schmalz, Bob Schmalz, and David Schmalz, all of Grafton. He is further survived by his brother-in-law John St. Peter of Belgium, nieces, nephews, other relatives and many friends.

Ken is preceded in death by his parents, sister-in-laws Donna Schmalz and Sandra St. Peter and his in-laws Norman and Edna Hoeft.

Memorials in Ken’s name to Christ the King Church appreciated.