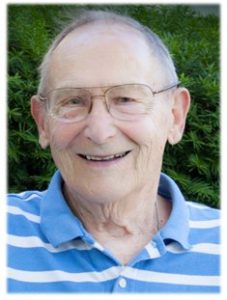 Wilfred E. “Willie” Krainz, age 88, of Roger Street, Port Washington, WI passed away peacefully Thursday, August 2, 2018 at Lasata Care Center in Cedarburg where he had lived the past few months.

He was born on September 21, 1929 in Port Washington, WI; son of John and Johanna Rotscheck Krainz. A life-long resident of the city, Willie graduated from Port Washington High School, Class of 1948.

During the Korean Conflict, from 1951 until 1954, Willie served in the US Marine Corps, achieving the rank of Staff Sergeant…his friends said “he must have sucked a lot of a$$”. On September 22, 1956 he married Patricia Werner of Port Washington at St. Mary’s Church in Port Washington. For over 50 years, the Krainz’s have lived and raised their family on Roger Street.

Before entering military service, Willie had worked in the Print Shop at the Ozaukee Press/Port Publications in Port Washington. When he returned from service, he worked for the City of Port Washington Water Department for 12 years. Later he would start at J&H Heating of Port Washington doing HVAC work. He would remain until his retirement in 1994.

Active in his community, Willie was a charter member of the Port Washington Leathernecks, a long standing member of the Van Ells-Schanen American Legion Post 82 and St. John XXIII parish. He had been an active outdoorsman, especially bowhunting and belonged to the Buckskin Bowmen and Wisconsin Bowhunters Association.

Willie was proud of his family and taught them what he knew about fixing anything and everything, providing the girls as well as the boys in the family their own toolboxes. He enjoyed going out socially with his wife and friends over the years, and always kept people laughing.

His Memorial Mass will be celebrated at 6PM Tues. Aug. 7 at St. John XXIII Parish-St. Mary Church, 430 N. Johnson St., Port Washington. Reverend Patrick Wendt will be the celebrant. Visitation will take place from 4-5:45PM Tues. prior to Mass AT CHURCH. American Legion walk-thru at 5:30PM. Interment will take place at St. Mary’s Cemetery in Port Washington with military honors.

Willie is preceded in death by his son Jon, sister Mary and her husband John “Jeep” Wildhagen, his brother John and his wife Janet Krainz and brother-in-law Barry and his wife Betty Werner.