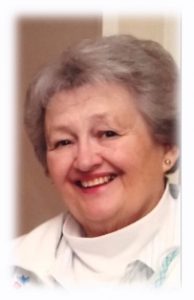 Betty “Joan” (nee Meeker) Strasburg passed away in peace and love, with family at her side, in the early morning of July 19, 2018, at her assisted living residence in Belgium, WI. She was a former resident of Springfield, MO.

Joan married Maurice A. Pettengill on May 11, 1952, in Laredo, MO. They were married for 18 years and had two children, Mary Pat Pettengill and Martha Jo Pettengill. On Nov. 16, 1973, she married Leroy “Lee” Clark Strasburg in Waukegan, IL, and the couple was together 38 loving years until Lee’s death in December 2011. Through Lee, Joan has two stepsons, Clark and Craig Strasburg.

Over the years Joan resided in Missouri, Wisconsin and Tennessee, and she and Lee retired to Springfield, MO. She was a proud and active member of the Wesley United Methodist Church in Springfield, where she shared her beautiful soprano voice in the choir, volunteered in the office, and led the Ladies’ Prayer Circle.

For over 40 years Joan devoted countless hours to genealogy research. Her extensive research materials have been donated to the Grundy County Jewett Norris Library in Trenton, MO.

Beyond being a homemaker and mother, in the 1970s Joan attended college and worked as a loving, caring nursing home administrator in Hartford, WI and in the 1980s worked as a personnel recruiter in the engineering field.

Her passion, however, was service to God. In retirement, she spent many hours volunteering for her church and its missions. Joan lived her life with a strong moral fiber and devout Christian faith. She was kind, caring, charitable, and a truly joyous person.

She deeply loved their dogs and enjoyed nature and song birds. Although Alzheimer’s Disease robbed her of so much, she retained her joyous, loving spirit. Joan often said “Smiling is contagious,” and her very last gift was a glorious smile.

Joan was preceded in death by her oldest daughter Mary Pat, her husband Lee and her parents.

A special thank you to Heartland Hospice. The compassion and professionalism you brought to her care were truly a blessing.

Donations in her memory are suggested to Heifer International, a charity whose mission Joan passionately supported, or to the Wesley United Methodist Church in Springfield, MO.