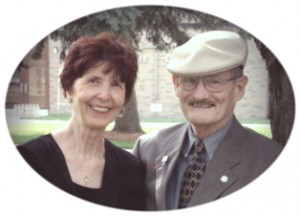 While surrounded by his loving family, Gerald E. Post, “Jerry”, age 84 from Saukville, passed peacefully on his journey home to Jesus and joined his Sweetheart, Winnie, and their baby girl, Beverly Sue, just in time to give each a New Year’s kiss on January 1, 2015.

He was born on December 2, 1930, son of Joseph and Marie Edwards Post, in Council Bluffs, Iowa. He graduated from Abraham Lincoln High School in Council Bluffs. From 1951 to 1955, Jerry served in the United States Air Force during the Korean Conflict as a pharmacy technician.

On September 7, 1957, Jerry married the love of his life Winifred Rose, “Winnie” Schmitt of Omaha, NE at St. Rose Parish in Omaha.

He went on to graduate from Creighton University School of Pharmacy in Omaha in 1958. Throughout his 30 year career, Jerry worked at numerous Veterans Administration hospitals – from Iowa City, to Reno, and Wichita. In 1973 the family moved from Wichita to Saukville so Jerry could accept the Chief Pharmacist position at the Clement Zablocki VA Medical Center in Milwaukee. After his retirement, he enjoyed working at local pharmacies, including 10 years at Drug Emporium to continue his passion of helping others. 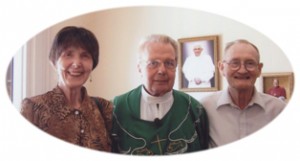 A dedicated husband, father of eight children, grandfather, and great grandfather Jerry was a man of family and faith. Active with his family and Immaculate Conception Parish in Saukville, he took on many roles. With his children he enjoyed coaching baseball and basketball, as well as, Cub Scouts and Boy Scouts. Jerry was a former parish council president, eucharistic minister, funeral alcolyte and CRE teacher. He was very active with the St. Vincent DePaul Society and served as president for years. Jerry was also a member of the Landt-Thiel American Legion Post 470 in Saukville.
A few of Jerry’s favorite things: Participating in daily and Sunday masses, enjoying coffee with buddies, spending time at the bluff with his Sweetheart, and cheering on the Bucks with his family and friends as a season ticket holder for 25 plus years. Everyone who knew Jerry, felt his warmth through his huge, genuine smile and gentle hugs.

Jerry is welcomed into Heaven by his wife Winnie, infant daughter Beverly Sue, his sister Patricia Cumberland, and parents Joseph and Marie Post.