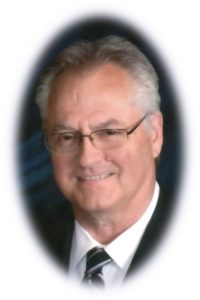 Bob was born December 31, 1948 at home in Wauwatosa, Wisconsin to Harry and Mary (nee Cunningham) Denzin. After high school, Bob started working for the City of Wauwatosa in 1967. He started in the street department before transferring to the water department. He retired as Water Maintenance after 37 years of employment. He took a leave of absence to serve in the United States Navy from 1968 to 1972.

He married Christine Bahr of Port Washington on May 30, 1987 in Milwaukee. They raised a family in Port Washington, Wisconsin. He was active in Port Catholic where his son was enrolled. Bob was also involved in assistant coaching with youth baseball and soccer. He never missed his children’s meets or games. After retiring, he filled his spare time by working at Columbia St. Mary’s Ozaukee Hospital as a Valet Supervisor. He then changed jobs and was hired as student shuttle driver for the Milwaukee School of Engineering.

Bob was a people person and an animal lover. But nothing made him happier than spending time with family and friends. He had an infectious joyous spirit and was ready to share a joke or funny story. He will be greatly missed.

He is survived by his wife Christine, children Zachary Denzin of Port Washington, Wisconsin and Natalie (Ben) Wieberdink of Cedar Grove, Wisconsin and grandchildren Ross and Haley Wieberdink. Further survived by estranged siblings Jerry and Carol, nieces, nephews, in-laws, other relatives and friends.

The Rev. Patrick Wendt will officiate a memorial service Thursday, February 22, 2018 at 6 pm at the Poole Funeral Home, 203 N. Wisconsin St., Port Washington, WI. Visitation will be from 4pm to 6 pm Thursday at the funeral home.

The family wishes to extend their gratitude to Dr. Nand, Dr. Lafferty, nurses and staff at Columbia St. Mary’s Ozaukee for their compassionate care.