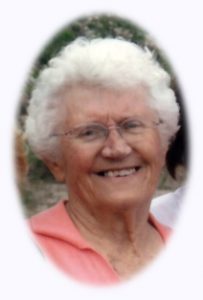 She was born on August 19, 1929 in Port Washington; daughter of Clarence and Adeline Turrie Gessner. Marilyn attended St. Mary’s Parochial School and graduated from Port Washington High School, class of 1947. For a time, Marilyn worked in the office at the Wisconsin Electric Power Plant in Port Washington.

On May 20, 1950 she married Donald J. “Perch” Rilling from Grafton at St. Mary’s Church in Port Washington. While raising their family, Marilyn became a “master” at sewing and knitting. When the children were young, she made their clothes and the best Halloween costumes. She knitted many sweaters and other garments, cherished by many to this day. Marilyn also enjoyed quiet time spent reading.

Over the years, Marilyn had been active at St. Mary’s Church and the Van Ells-Schanen American Legion Post 82 Auxiliary.

She is survived by her children Karen (the late Doug) Conradt and Jim (Gloria) Rilling, both of Port Washington, Diane (Don “Diego” Schultz) Rilling of Oregon, WI and Suzanne Rilling of Wilmington, NC, 10 grandchildren, 20 great-grandchildren, her sister Arlene (the late Elmer) Klein of Fredonia, other relatives and friends. She is preceded in death by her husband Perch on December 31, 2010, her son Thomas “TJ” Rilling and her brother James Gessner.