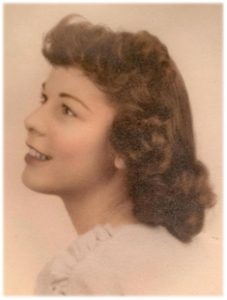 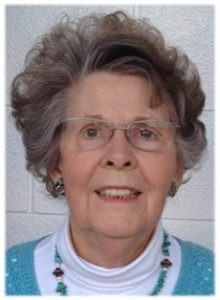 Rita Sophia (Schowalter) Decker (pictured at age 17 and 87) joined her husband Gerald Andrew (Jerry) Decker in the eternal Kingdom of God on Nov. 2, 2019. She died peacefully at her home with family by her side. She was 93.

Born in Port Washington, WI to the late Joseph and Dorothy (Feltes) Schowalter on Dec. 23, 1925, Rita attended St. Mary’s Catholic School and graduated from Port Washington High School in 1943. In 1947, she married Jerry Decker of Holy Cross, WI. The couple soon started a family and Jerry (a stone mason by trade) later built their home on Port’s West side in 1953. She lived in that home for 66 years before her passing. Jerry also passed away at the family home on Feb. 9, 2000.

Rita was known as a devoted wife, loving mother, creative homemaker, wonderful cook, and always kept a beautiful garden. She raised six children and often made the dresses her daughters wore to homecoming or prom and attended the sporting events of her sons. She was a sports fan who loved watching the Packers and Brewers. Until recent months, Rita could often be seen walking through her neighborhood for exercise and was quick to greet people with her infectious smile and a sincere compliment. She was loved by many friends and extended family and known as a kind and giving person.

Memorials can be donated to the Ozaukee Humane Society in the name of Jerry and Rita Decker. A memorial gathering for family and friends will be held in the summer. Date and location of the gathering will be announced at a later date. Arrangements were handled by Poole Funeral Home/Crematory, Port Washington, WI. Info and condolences available at www.poolefh.com or 262-284-4431.