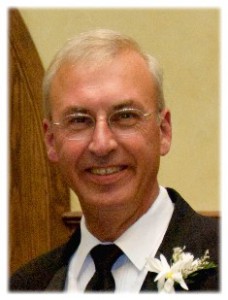 He was born on August 1, 1951 in Green Bay, WI; son of Gordon “Bob” and Marion Griffiths Conradt. As a young boy, the family moved to Mequon. Doug graduated from Homestead High School in Mequon.

On May 13, 1972, Doug married Karen Rilling of Port Washington at St. Mary’s Catholic Church in Port Washington. For over 30 years, Doug worked for A.O.Smith Company in Milwaukee, retiring in 2000. Over the next few years Doug continued to work until his health declined.

Doug loved his six daughters and the grandkids. His baby was his red Camero, however. He loved showing it off at the local car club or just driving around. Doug also became a proud woodworker. He crafted the family’s dining room tables, chairs and end tables. He made rocking chairs and entertainment centers. He made the crown moldings and with his wife, installed hardwood floors throughout their home.