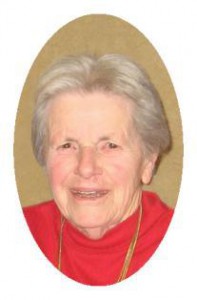 Julianna “Juli” V. Burmesch, 87, passed away peacefully on August 2, 2012 at the Harbor Club in Port Washington.  She was born in the Town of Port Washington on September 7, 1924, daughter of Phillip and Anna (Meyer) Karrels.

She was united in marriage to Wilfred J. “Wiff” Burmesch on May 29, 1946.  She was employed at Tecumseh Products for 18 years, retiring in 1986.  She then enjoyed many retirement years babysitting for children outside the family and caring for her grandchildren.  Little things made Juli happy.  She enjoyed gardening, playing cards and especially spending time with her family.  She was a faithful member of St. Mary’s Church in Port Washington and was active in the Christian Mothers during her earlier years.  She is preceded in death by her husband Wilfred on May 27, 2012.

The family would like to thank the staff of the Harbor Club.  Special thanks to Carrie and Jessie from Home Instead for their tender loving care and concern for Juli.