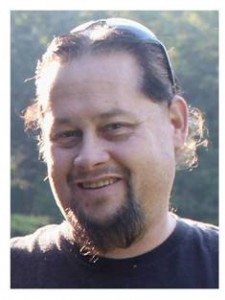 He was born on March 2, 1969, son of Ward and Joan Bichler Braby in Port Washington.  He grew up on West Monroe Street, graduating from Port Washington High School, class of 1988.

For almost 20 years, Bill worked building and grounds maintenance for the Ozaukee County Administration Center (Courthouse) and the Justice Center.  He enjoyed the interaction of staff and patrons throughout each day.  He was always a fan of Science Fiction and Comic-Con.  Bill was quite the artist with his drawings and paintings.  Just by driving by his house, one would know he was a fan of Star Wars with his Darth Vader and Storm Trooper keeping watch.  He kept a watchful eye around the house, tending to his bird feeder, checking on the deer or his garden.  He always took young Zoey to school and had his canine buddy Sheldon for comfort.

Bill is survived by his dad Ward of Port Washington; sisters Jean (Mark) Jacoby of the Town of Erin and Joanne (Dave) Dahm of Random Lake; his nieces Lauren (Daniel) Rakowski, Alyssa and Shannon Jacoby and Sarah and Danielle Dahm; his nephews Christopher Braby, Ryan (Cesie Hoffer) Dahm and Matthew (Biance) Dahm and great-nephews Tyler, Cole and Jaxen Rakowski; his dear friend Brandi Seltrecht and her daughter Zoey, other relatives and dear friends. He is preceded in death by his mother Joan Braby and his brother James Braby.