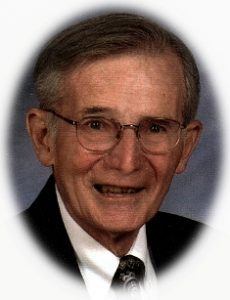 Fred was born in June of 1924 in Port Washington; son of Charles W. and Gertrude Klein Beck. He attended St. Mary’s parochial school and graduated from Port Washington High School, class of 1942.

In January, 1943, Fred was inducted into the Army and served until November, 1945. He served in the 29th Infantry Division as an Instrument Operator and Battery Computer in the 111th Field Artillery Battalion in Fire Direction Center. He served in Scotland, England, France, Belgium, Germany, the Netherlands and Denmark. He received four Battle Stars and was awarded the Bronze Arrowhead for taking part in the initial landings in Normandy on June 6, 1944.

On May 14, 1949, Fred married Carol M. Hamm of Belgium at St. Mary’s Catholic Church in Lake Church. They settled in Port Washington where they raised their family.

For many years, Fred worked at the former JE Gilson Foundry as a Standards Engineer until it burned in February, 1962. Soon after the fire, he took a job with Simplicity Mfg. Company in Port Washington. There he worked for more than 24 years, retiring in 1986.

Fred was a member of the 29th Infantry Division Association, the Van-Ells-Schanen American Legion Post 82 and the International Association of Machinist and Aerospace Workers Local 1430. He was a trustee of Branch 31 of the Catholic Knights Insurance Company for 25 years, St. Mary’s Parish and the St. Mary’s Usher Society for 35 years.

His favorite diversion was dancing with his wife and friends on Sunday afternoons. Polkas and the waltz were his favorites. Fred also enjoyed working crossword puzzles, reading and tending his large vegetable garden for many years.

Fred and Carol enjoyed traveling and took many motor coach trips around the United States, Mexico and Canada. They especially enjoyed their trips to Hawaii and Europe.

Fred was an ardent Packer and Brewer Fan. He saw his first Packer game in October, 1942 at State Fair Park. Over the years he also enjoyed attending PWHS football and basketball games.

In 2010, Fred was inducted into the Port Washington High School Veterans Wall of Honor. In 2015 he took the Honor Flight Tour of Honor to Milwaukee.

He was preceded in death by his parents and his brother Clarence Beck.

A Memorial Mass of Christian Burial will be celebrated at NOON, Saturday, December 2, 2017 at St. John XXIII Parish-St. Peter of Alcantara Church, 1802 N. Wisconsin Street, Port Washington, WI. Reverend Patrick Wendt will be the celebrant. Family will receive relatives and friends from 10AM until time of Mass. Interment St. Mary’s Cemetery, Port Washington with military honors.