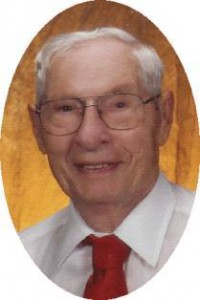 Jerome “Jerry” Eischen, 91, of Pierre Lane, Port Washington died Sunday, August 23, 2009 at his home.  He was born on October 25, 1917.  He was the son of Jacob and Margaret Becker Eischen of Dacada.  He grew up on the family farm in Random Lake.  He was a very creative person.

By the age of sixteen, he built his own combination sanding and saw machine.  He used it to help remodel houses for family.  He also built two houses for his own family-one in Random Lake and one in Port Washington.

He was employed at Jung’s Brewery, Damkot Tile Company, Gehl Mfg. Company and lastly worked at the Seitz Mfg. Co., for the last 40 years as a hone operator, retiring at the age of 80 in 1997.

He was a kind and gentle husband, father and grandfather who enjoyed spending weekends with his family at their cottage in Antigo.  He enjoyed dancing and playing cards with friends along with woodworking he made windmills, bird houses to share with others.  Our beloved “Dad” will be missed deeply; now that he is heaven bound.

He is preceded in death by his parents, two brothers Art and George Eischen and two sisters Julia Jacky and Adeline Zitzelberger.