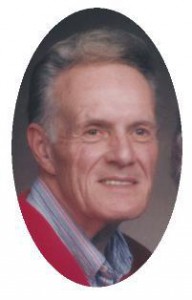 Robert G. Zausch, 84, formerly of the town of Grafton died Monday, December 29, 2008 at Seven Oaks Care Center in Glendale, where he had been a resident.

He was born July 13, 1924 in Port Washington, Wisconsin to Alfred and Agnes Lorge Zausch.  He attended St. Mary’s Grade School and Port Washington High School.  After graduation he enlisted in the United States Coast Guard, serving as a Fireman First Class during World War Two.  After returning from the war he married Dorothy “Bunny” Hoppe of Port Washington on September 11, 1954 at St. Mary’s Church.

Bob worked in Sales for the food company Drury White Company in Milwaukee for over thirty years, retiring in 1979.  He was an usher at St. Mary’s Church and a member of the former Holy Name Society, Ozaukee Memorial Post 5373 VFW and former member of Van Ells-Schanen American Legion, Post 82.

Bob will be remembered as an avid sports fan, dancing the Jitterbug at weddings, playing cards and just shooting the bull.  He was also the family grillmaster.  He was most proud of his kids and being “Grandpa Z”