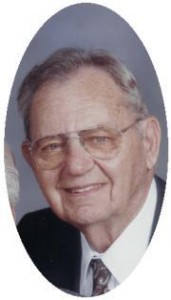 He was born August 27, 1920 in St. Augustine (Town of Newburg), Wisconsin to Martin and Hattie Gleiszel Wollner.  He worked as a milk hauler before entering the Army Air Corps serving during World War Two.  He married Dolores Schreiner on April 12, 1947 at St. Francis Borgia Church in Cedarburg, Wisconsin.

Carl drove truck for over 25 years for Roundy’s Foods in Milwaukee and retired in 1982.  He was a member of the Teamsters Local 200 Union and the Landt-Theil American Legion Post 470 in Saukville.  He resided in Saukville for over 50 years and was a devoted husband and father.  Carl enjoyed traveling throughout the United States, wintering in Texas for many years and camping.