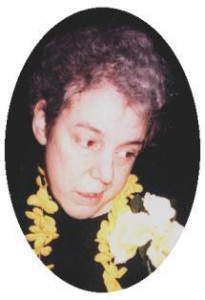 Barbara A. Welch, age 63, resident of Heritage Health and Rehabilitation Center of Port Washington for the past year, died Friday, January 31, 2014 at the Lawlis Family Hospice in Mequon, WI.

Barbara had been active over the years with the Portal Programs in Grafton.  Though physically and mentally challenged, she joyfully shared of herself to others.

She is survived by her mother Carol Renzel of Port Washington, two brothers James (Sandra) Welch of Denver, NC and John “Jack” (Nina) Welch of Louisville, KY, her nieces and nephews, other relatives and friends.  Barbara is preceded in death by her father Robert Welch and step-father Ralph Renzel.