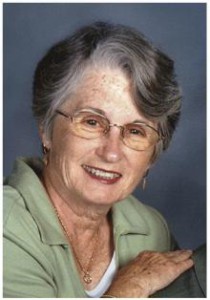 She was born on November 26, 1936 at the Pabst Farms in Milwaukee, daughter of Walter H. and Josephine “Jo” Haslacher Quade. She moved to Saukville in 1947, living on South Main Street.

On September 5, 1959, Jerrie married Robert A. “Bob” Dickmann, also of Saukville, at Immaculate Conception Church in Saukville. Together they lived on Highway O for the past 54 years.

For many years, Jerrie worked in the Ozaukee County District Attorney’s Office under William Koenen and Walter Swietlik. Later, she was a legal secretary at the law firm of Huiras, Farrell and Antoine in Port Washington for over 20 years. Mostly, she was a daughter, wife, mom, “oma” and sister.

Jerrie made everything special. She was an energetic, enthusiastic, caring and a loving woman. She enjoyed special time spent with family and friends. Whether it was at her home, up north at the cottage or down in Florida. She took great pride in her home, enjoyed spending time cooking and found serenity in her flower gardens. She provided loving care to her mother Jo; support and loving guidance to her children and grandchildren. Jerrie was a member of St. Peter’s United Church of Christ in Saukville. Through her church she was an active volunteer with the Saukville Food Pantry, Church Prayer Circle, Annual Rummage Sale, Pancake Breakfast and School Supply Drive. She also enjoyed the friendship from the ladies of the Red Hat Society. She will be sadly missed.

She is survived by her husband Bob, daughters Sue (Doug) Kempema and Lynn (Steve) Beck, both of the town of Saukville; six grandchildren Chad, Bryce, Kaitlyn, Abbey, Eli and Ethan; her sister Joanne (Ron) Blanchard of Mission Viejo, CA; her brother Walter J. “Wally” (Kathy) Quade of Fredonia, her sister-in-law Kay (Al) Karrels of Saukville, nieces, nephews, other relatives and friends. She is preceded in death by her parents and her son Craig Dickmann.