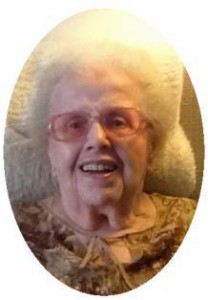 She was born to Ernest and Helen Last Kibble on June 6, 197 in Port Washington, Wisconsin.  She grew up here and worked for Phillip Sales which later bacame Moldcraft in Saukville.  She married commercial fisherman Eugene “Doc” Molitor of Port Washington on January 13, 1940 at St. Mary’s Church in Port Washington. He preceded her in death June 25, 1978.

Viola was a former member of the eagles Women’s Auxillary.  She enjoyed playing bingo and sheepshead and going to the casinos.  She liked to stay in touch with her family and friends and enjoyed using her I-Pad for Facetime and facebook.  Viola always said she couldn’t help the whole world, but thought she was making a difference when she was able to help one person at a time.

Viola did not want a funeral service.  She will be cremated and laid to rest in Union Cemetery in Port Washington, Wisconsin.