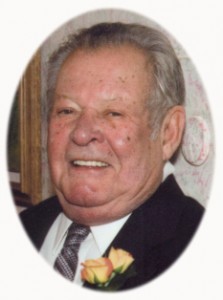 He was born on July 11, 1928 in Port Washington, son of Victor and Leona Krick Weinrich. Jack graduated from Port Washington High School and entered the Merchant Marines. For a few years, he worked the Great Lakes on coal boats.

On June 21, 1952, Jack married Lilian K. Rock of Cedar Creek, WI at St. Mary’s Church in Port Washington. Together they raised their family on West Jackson Street. She preceded him in death on October 7, 2006.

Jack was a man of many talents. He worked many different jobs throughout his life; often two at a time. He worked construction of the Port Washington Power Plant smoke stacks and Harnischfeger Homes. For over 30 years, Jack was the “shipping clerk” for the former JJ Schowalter Co. in Port Washington, retiring in 1992. Most evenings, Jack could be found bartending at places such as Bink’s Bar, Chalet on the Lake, The Dixie, The Port Hotel and especially his son’s restaurant Newport Shores in Port Washington.

In his retirement, Jack helped his wife with her crafts and was the official taste tester of amazing desserts she made for the restaurant. His love of the Great Lakes continued with his construction of model boats replicating vessels of many types which are displayed at Newport Shores.

Jack is preceded in death by his wife Lilian, his brother and wife Bill and Marge Weinrich and his sister Sue Ann Weinrich.

A Service of Committal will be held at St. Mary’s Cemetery Chapel, Port Washington at 11AM Thursday, December 10, 2015. No Visitation.