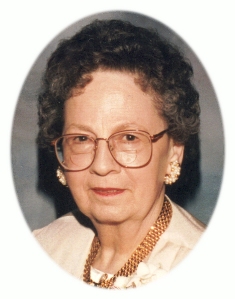 She was born in Chicago, IL on June 13, 1920, daughter of Vincent and Georgine Russell Caporali. As a young girl, that family moved to Port Washington. Mary graduated from Port Washington High School and worked at the former Badger Raincoat Mfg. Company.

Besides being a wonderful homemaker, Mary waitressed at the former Grafton Hotel. She later began work in the office for Bolens Mfg. Company in Port Washington, where her husband also worked. Together they retired in 1982.

Over the years, Mary was active in numerous Bridge card clubs. She enjoyed knitting and crocheting. She will be remembered for her baking skills that were tough to duplicate. She was a member of St. Mary’s Parish and the Christian Woman Society. Her husband Bill preceded her in death on November 5, 1994.

Mass of Christian Burial will be celebrated at 6PM Tuesday, December 15, 2015 at St. Peter of Alcantara Catholic Church, 1802 N. Wisconsin Street. Port Washington. Reverend Patrick Wendt will be the celebrant. Visitation will take place from 4-6PM Tuesday AT CHURCH with a 4PM rosary. Entombment will be at St. Mary’s Cemetery, Port Washington. Memorials to charity of choice appreciated.