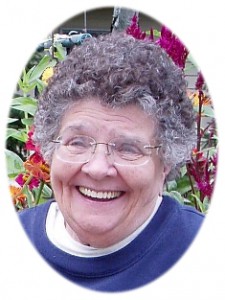 She was born on April 28, 1932, daughter of Herman and Agnes Lehr Cook. Growing up on the family farm she learned the love of the outdoors and the value of family. After graduating from South Milwaukee High School she started work as a stenographer.

On June 20, 1953, Lucille married Haig Vahradian of Carrollville. Over the years they raised their family and later Lucille worked for the University of Wisconsin – Parkside. She worked for over 20 years, where she provided clerical and office support for the staff and students, retiring in 1993.

Lucille will be remembered for her love of family, cooking and gardening. In early years, her family often spent time picnicking with her sisters and their families and camping vacations throughout Wisconsin, Yellowstone, Smoky Mountains and Canada. In later years, good times were spent at Sawyer Lake. At family gatherings she was quick to shuffle the cards for a game of sheepshead insisting that everyone down to the last grandchild learn the game. Memories fill the family with joy.

She also enjoyed sports – from activities in her youth, to swimming, water skiing and cross-country skiing in her later years. Her continuous support at sporting events for her children and grandchildren will never be forgotten. Always a sports fan, she was often knitting up a storm during Packer games.

Family and friends are invited to a celebration of life (potluck picnic) at noon, Sunday, September 14, 2014 at the Lions Pavilion in the Upper Lake Park in Port Washington.

Click here for more details and a printable announcement.