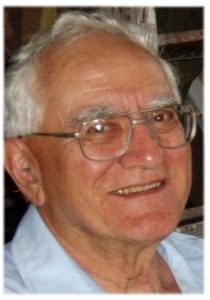 Haig Vahradian, age 86, formerly of Kenosha, WI, passed away peacefully Friday, July 29, 2016, at Heritage Nursing and Rehabilitation Center in Port Washington, WI where he had resided the past 2 years.

He was born on April 6, 1930, the son of Harabed and Arousaig Tavidian Vahradian. Haig grew up in Carrollville, WI and after high school graduation, headed to Chicago, IL to study electronics at Devry University.

On June 20, 1953, Haig married Lucille Cook of Oak Creek, WI. Together they raised their family in Kenosha, WI where Haig was an Electronic Tester, testing the work of others and diagnosing problems, with Dynamatic Division of the Eaton Corporation, retiring in 1989. Haig and Lucille moved to Grafton, WI in 1994 to be closer to family. Lucille preceded him in death on August 19, 2014.

Haig was exceptionally handy, a man who could diagnose and fix most anything. From appliances to lawnmowers to televisions to cars; Haig could fix it. He truly enjoyed the challenge and was generous with his talent, helping frustrated friends and neighbors with something that didn’t work. He was also a gifted craftsman, well-known for the quality of his work.

Family was important to Haig – he loved to spend time with his children and grandchildren, teaching by example and attending events. Having been a trumpet player in his youth, he passed on his love of music to his kids. When the boys were young, Haig was active in Boy Scouting. He and the family enjoyed picnicking and camping vacations throughout Wisconsin, Yellowstone, the Smokey Mountains, and Canada. The purchase of the cottage at Sawyer Lake provided years of fun for the family and hours of enjoyment for Haig, using his handyman skills. Haig was always ready to pack for trips and vacations. Lucille would set out everything that needed to go and Haig would expertly pack.

A dog lover, he was notorious for spoiling the family dog – the jar of dog treats sat right next to his chair. He was not known for his dog training skills. 🙂

Haig is preceded in death by his wife Lucille, two sisters Mary Hartunian and Anna Yogurtian along with Anna’s husband, Roupen Yogurtian.

Family and friends are invited to a Celebration of Life (potluck picnic) at noon, August 14, 2016, at the Mini-Shelter just south of the Lion’s Pavilion in Upper Lake Park in Port Washington.

Click here for more details and a printable announcement.