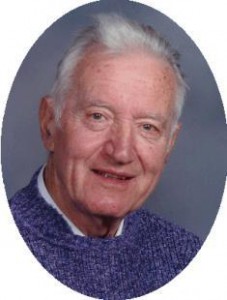 Funeral  services will be held Tuesday, May 10, 2005 for Port Washington native John Edward Trepel.  Diagnosed with colon cancer in September of 2003, he ran a good race, but lost to the disease on May 5, 2005.

He was born May 7, 1920 to Josephine Jeray and John Trepel.  He served as a weatherman in World War Two.  After his discharge, he attended the University of Missouri and was graduated with a Bachelor’s degree in Journalism.  He worked briefly in Milwaukee, then spent the remainder of his career as advertising manager at the Ozaukee Press in Port Washington.

He married Marion Glieber on September 16, 1950 and they had five children.  In 1977 his wife Marion died.  He met Joyce Durst Siebold of Algoma, Wisconsin and they were married May 11, 1979.

John was a person of many interests and talents.  He was a world traveler, avid tennis player with a nasty backstroke and killer serve, a placer of bets and Wall Street Guru.  He was an angelic demon, competitive card player, a wordsmith, cookbook author, an oenologist and possessed great culinary skills at grilling steaks while drinking a martini and singing “Ramona” in forte.  He lit up many parties with his stimulating conversations, was a contrarian, voracious reader and a staunch Democrat challenging Republican and any opposing viewpoints.  He was proud of his Slovenian heritage and danced a wild polka.

His quirky personality kept his family alert and smiling.  Reading glasses could be found in the refrigerator, slippers on the stove and a baritone voice heard resonating from the shower.  He was a clothes horse with a mismatched wardrobe.  Shorts in November were not uncommon.