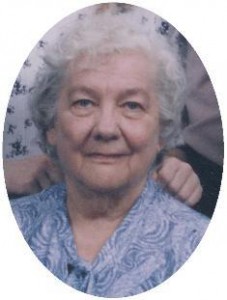 She was born in Port Washington, Wisconsin on February 15, 1922 to Fred and Wilhelminia “Minnie”  Follett Klopp.  After graduating from Port Washington High School in 1940 she attended Nursing School in Milwaukee County.  She worked as a nurse until she married David H. Wittkopp of Port Washington at Congragational Church in Port Washington.  They moved to Milwaukee and moved around as her husband was in the Air Force.  He preceded her in death October 12, 1963.

After her husband died she moved back to Port Washington and began working at the former St. Alphonsus Hospital.  In 1973 she move to Milwaukee to start work at the Milwaukee County Mental Health Hospital where she retired from in 1989.  She returned to Port Washington and resided at Harbor Club and most recently at Heritage Nursing and Rehabilitation Center.

When her children were younger she was active in the Cub Scouts as a Den Mother and was a Girl Scout Leader.  She was a former member of Friedens Evangelical Church.  She liked to collect butterflies and frogs.