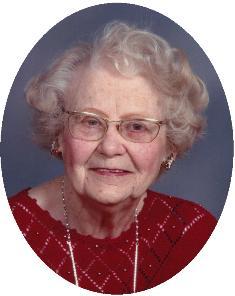 She was born on July 18, 1911 in Saukville to John J. and Katherine Huettmann Horn.  On August 17, 1940 she married Wilfred N. Thome of Port Washington at Immaculate Conception Catholic Church in Saukville. He preceded her in death on October 26, 1982.

Together they operated the Clover Farm Grocery from 1940 to 1953, originally on the site of the current WJ Niederkorn Library and later moving to 139 W. Grand Avenue.  She later became a bookkeeper for Ataco Steel Products in Grafton for over 20 years, retiring in 1976.  Throughout this time she also was an insurance sales representative for the National Society of Foresters Court 724 and held numerous court offices.

She is survived by her son John D. (Darlene) Thome of Howards Grove, three grandchildren Jon (Trudy) Thome of Plymouth, Craig (Sara) Thome of Oak Creek and Trecia (Jon) Shane of Muskego; five great grandchildren Jonathan and Drew Thome and Tyler, Abby and Rachel Shane, nieces, nephews, other relatives and friends.  Along with her husband Wilfred, she is preceded in death by three sisters Anna Hughes, Louise Hillegas and Vernita Horn and her brother Monroe Horn.

A Memorial Funeral Mass will be celebrated Tuesday May 17 at 6PM at St. Mary’s Catholic Church, Port Washington.  The Reverend Allan Sommer will be the celebrant.  Interment will take place at Holy Cross Cemetery, Milwaukee.  Family will receive friends from 4-6PM Tuesday AT CHURCH with a 4PM rosary.  A memorial fund has been established in Rosalia’s name.