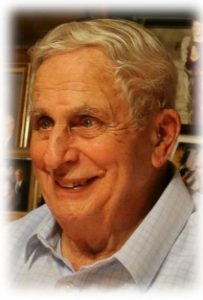 He was born December 24, 1926 to John M. and Eleanor Bichler Tackes in the town of Belgium, WI. He grew up in the area and attended local schools. He served in the United States Navy and the United States Army during WWII in Korea and Japan.

Stanley married Angela “Angie” Federmeyer on June 9, 1956 at St. Florian Catholic Church in Milwaukee, WI. They just celebrated 63 years of marriage together, raising their children and living in the same home up until 9 months ago.

He drove truck for Tractor Transport in Milwaukee, WI before being employed by the Village of Grafton-Public Works Dept. He retired as a foreman after 31 years in 1992. He was a member of the International Molders and Foundry Workers Local 185, the international Brotherhood of Teamster Local 200 and the Rose Harms American Legion Post in Grafton.

He loved working with his hands and working outside. It didn’t matter if it was operating large machinery like backhoes and bulldozers or working in his garage on birdhouses. He enjoyed getting behind the wheel of a car driving anywhere and traveling, camping and sightseeing across the country. He was a very hard working, loving and caring husband, father, grandfather and great-grandfather. Family meant the world to him as did his close friends and neighbors. He was there to help anyone in need, no matter if it was snow blowing a sidewalk, mowing a lawn or climbing a ladder to clean a gutter.

He volunteered with his wife at the St. Ben’s Meal Program in Milwaukee and was a member of the Catholic Knights and the Holy Name Society at St. Nicholas Church in Dacada, WI. He was a member of St. Joseph Church in Grafton for decades and transferred to St. Francis Borgia Catholic Church in Cedarburg when his grandchildren were in choir there. He served as usher at both churches for more than a total of 50 years.

Stanley is survived by his wife Angie and daughters Elizabeth (Timothy) Ryan of Cedarburg, Nancy (Dave Mauer) Neylon of the Town of Saukville and Janice (Jeff) Kuenstler. Further survived by grandchildren Zachary Neylon, Angela Ryan, Tyler Ryan, Jon (Katie) Kuenstler and Allen (Krissy) Kuenstler, great-grandchildren:Elyza Kuenstler, Raelyn Kuenstler Wesley Kuenstler, Nate Neylon, Brexley Neylon. He is further survived by two sister-in-laws: Lucille Sutter and Myrt Tackes. He is loved and will be missed by many nieces and nephews and close friends as well.

He is preceded in death by his son Timothy and his siblings Ralph Tackes, Quentin Tackes, Mary Bobboni, John Tackes and James Tackes.

The Rev. Patrick Burns celebrates Mass of Christian burial Noon Tuesday, July 9, 2019 at St. Francis Borgia Catholic Church, 1375 Covered Bridge Road, Cedarburg, WI. Visitation 10 AM to 11:45 am AT CHURCH prior to the mass with an American Legion walkthrough at 11:45 AM.