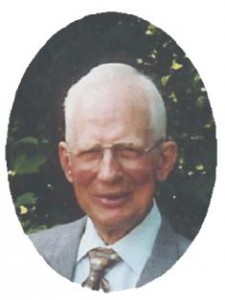 He was born on January 2, 1918 in Choteau, MT, son of Joseph and Katherine Keller Tackes.  He left the farm as a young man and moved to Port Washington, WI.  Mike served overseas as a sergeant in the Army from 1941 to 1945.  On June 25, 1949 he married Vernette M. Mueller of the Town of Holland at St. Nicholas Catholic Church in Dacada, WI.

He was employed at the Port Washington Power Plant as a control operator for over 33 years, retiring in 1980.  He was a member of the International Association of Operating Engineers Local 317.  He was active with the Country Promenade Square Dancers and enjoyed tending his garden with his wife.  He has been an usher with St. Mary’s Catholic Church, Port Washington for many years.

St. Vincent DePaul Society has been a big part of Mike’s life.  Since 1963 he has been active from establishing a store in Port Washington through helping numerous people.  He was honored by receiving the St. Vincent DePaul Ozanam Medallion for distinguished and continued service, the Society’s highest honor.  He has been a member of the Catholic Knights Society for over 50 years.

Mass of Christian Burial will be celebrated at 7:30PM Monday, July 19, 2004 at St. Mary’s Catholic Church, Port Washington.  The Reverend Allan Sommer will be the celebrant.  Entombment will be in the parish cemetery.  Visitation will be from 4-7PM Monday at the Poole Funeral Home, Port Washington. Memorials appreciated.