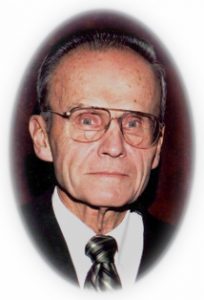 Gene was born and raised in Grafton. He attended St. Joseph’s Parish School. Later as a Grafton Black Hawk, Gene was involved in the drama and discussion clubs, baseball, basketball, and 6-man football. As the son of Michael and Sally Schmit, he learned the business of real estate and auctioneering. The father and son pair established M. J. Schmit and Son Realtors and Auctioneers and later renamed Gene W. Schmit, Realtor and Auctioneer following his father’s passing and Schmit’s Ballroom.

Gene danced his way to meeting his loving wife, Rosemary. Following the marriage in November of 1956, the couple raised their three boys, Randy, Rick, and Robb. Active in many community organizations and recognized by them all for his contributions, the proudest of all achievements was his family. Like his relationship with his father, Gene instilled the same business and ethical practices into his three sons who continued the tradition with their children. Gene was a modest man yet most prideful about his children and grandchildren. He frequented and supported their activities every chance he had.

Gene’s friendships were as much a blessing to others as they were to him. Please remember him as the modest, generous, and Christian man who enjoyed polka, softball, family, and his faith.

Memorials can be made to the Grafton Lions Club, Alzheimer’s Association or the American Cancer Society.