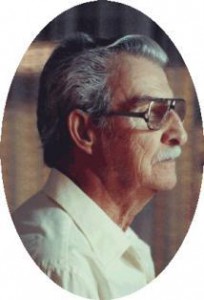 Russell Reynolds, 86, of Maple Crest in Port Washington died Sunday, November 23, 2003 at his residence.  He was born October 19, 1917 to Oakey and Lola Putman Reynolds in Richmond, Virginia.  He was one of nine children and grew up in Pennsylvania and left school during the depression.  He worked and traveled with the Civilian Conservation Corps. and later settled in California.

Mr. Reynolds was an Aviation Machinist with Northrup Industries in California until he retired and moved to West Palm Beach, Florida.  While in Florida he enjoyed singing in a barber shop quartet.  In 2002 he moved to Port Washington.  Russell always had an interest in photography and painting.  He even had some photo commercial work published years ago and he enjoyed oil painting on canvas.  A stickler for detail he was curbed due to Parkinson’s Disease.

He is survived by his son Robert (Laura) Reynolds of Grafton and a granddaughter Stephanie Kopet also of Grafton.  Further survived by other relatives and friends.