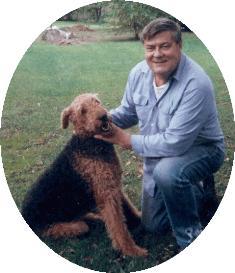 August P. “Augie” Glander, 71, of N Mill Street in Saukville died at his residence on Sunday November 16, 2003 of cancer.

He moved from Milwaukee to Saukville to work in his father’s shop, Glander Metal.  He attended St. Norbert’s College in DePere for 2 years.  He was a life member of the Saukville Rifle and Pistol Club.  He worked as a metal fabricator and welder and was retired from Modern Equipment in Port Washington.  He had also worked for Frame Engineering in Port Washington and at various metal fabrication shops throughout the county over the last few years.

He enjoyed ornamental copper and iron work (i.e. furniture, bowls and platters, outdoor) and was an avid hunter and fisher.  He loved his 2 airdale canine companions Maggie and Harley and he also love traveling the country with his wife.