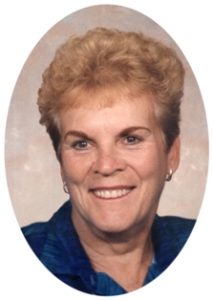 She was born on May 26, 1930 in Milwaukee, WI; daughter of Adlor and Hilda Klein Gagne. Irene grew up in Port Washington, WI and attended St. Mary’s Catholic School, later taking a job at the former Montgomery Ward Store in town.

On November 7, 1953, Irene married August F. “Dutch” Nuedling of Milwaukee at St. Mary’s Catholic Church in Port Washington. Together they started their family, living on North Harrison Street. After a few years and a few children, they moved to East Norport Drive. Irene worked at Modern Equipment Manufacturing Company for a few years, later working in the office at St. Alphonsus Hospital.

Irene was a friend to all. She enjoyed being active with her children and their families or St. Peter’s parish where she had been a member for many years. Dutch and Irene played golf together and played Sheepshead. Irene looked forward to time spent with friends at McDonalds and Culvers every week.

She is preceded in death by her husband Dutch on December 28, 2003, her sister Pat Franks and her brothers Donald and Bud Gagne.