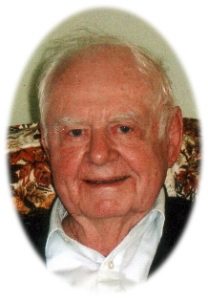 He was born on March 23, 1921; son of Robert and Lucy Grasher Leider on the family farm just north of Fredonia.  On September 24, 1942, Greg entered the United States Navy.  During World War II he was a naval aviator achieving the rank of Lieutenant Junior Grade, discharged on December 16, 1945.  When he returned home he participated in the National Guard.  At the same time, Greg built, owned and operated an airport near Fredonia.  He provided services, charter flights and a government approved flight instruction school.

On June 25, 1949, Greg married Lavern Lauters of the town of Port Washington at Holy Cross Catholic Church in Holy Cross, town of Belgium.

Greg later closed the airport in 1953, taking the plant manager position with Kenro Corportation in Fredonia.  He later became a financial broker and resident manager for BC Ziegler and Company’s branch office in Sheboygan, retiring in 1986 after 17 years with the company.

An active member of St. Rose parish in Fredonia, Greg is also a retired member of the Fredonia Fire Department, Fredonia Advancement Association, Catholic Order of Foresters and the Warren-Kane American Legion Post 410.

Greg always loved a polka and operated a duplication studio for polka music in his retirement.

He is preceded in death by his twin sons Dennis and Daniel, his sisters Helen Arendt, Julia Eischen and Lucille Vanderloop, his brothers Henry (Harry) and Alois (Al) Leider and son-in-law Dan Dean.

A Mass of Christian Burial will be celebrated at 6PM, Monday November 14, 2016 at Divine Savior Parish, St. Rose Chapel, 305 Fredonia Ave., Fredonia.  Reverend Richard Cerpich will be the celebrant.  Interment St. Rose Cemetery in Fredonia.  Family will receive relatives and friends from 4-6PM Monday AT CHURCH.