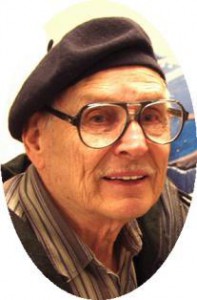 Meifert, 90, of the Harbor Village in Port Washington, formerly of Crystal Springs Drive in Fredonia, died Tuesday, August 24, 2010 at Columbia St. Mary’s Hospital – Ozaukee Campus in Mequon. He was born March 11, 1920 in Shawano, Wisconsin to Hugo and Pauline Allerly Meifert, Sr.  In high school he was on the track and field team and maintained a fit lifestyle walking and exercising often.  He served in the US Air Force from 1940 to 1945 as a radio code operator stationed in Alaska.  He married Dolores Barke of Gillett, Wisconsin on June 18, 1949 at St. John Evangelical Lutheran Church in Gillett.

Shortly after their marriage they moved to Milwaukee where Hugo took a job as an assemblyman for American Motors Corp. for 23 years.  He then worked in Building and Grounds Maintenance for Doerr Electric Company for 13 years retiring in 1983. The couple moved to Crystal Springs Drive in Fredonia in 1976  and stayed there for 34 years, moving to Port Washington in February of 2010.  He was a 35 year member of St. John’s United Church of Christ in Random Lake.

Hugo was a handy man, good with his hands, and active, keeping busy with his wife as his assistant.  He enjoyed working on his house and yard, tending to the flower garden and built a tractor shed, garden shed, lawnmower shed and wood shed.  He restored old horse collars and primitives, was a Green Bay Packer fan and had quite a collection of clowns.  He will be remembered by his trademark beret cap and happy demeanor.

He is survived by his wife of over 61 years, Dolores of Port Washington and son  Tom (Sherre) Koenig of Portland, Oregon.  Further survived by sister Esther Nickel of Shawano, sisters-in-law Grace Dunlap of Oconto Falls and Emmie Jean Barke of Gillett, nieces, nephews, other relatives and friends.  He is Preceded by 2 sisters Ruth Stukey and Margaret Hesse and 3 brothers Auggie Meifert, Emil Meifert and Clifford Meifert.