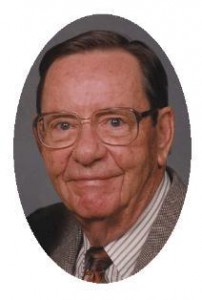 Fred was born to Paul and Alma Knueppel Marquardt on October 20, 1916 in Port Washington, Wisconsin.  He enlisted in the Army  and entered on July 15, 1941 serving until his discharge as a Staff Sargeant on August 31, 1945.  Upon his discharge he worked for the former J E Gilson Foundry in Fredonia.  Later he began working for Modern Equipment Manufacturing Company in Port Washington as an accountant.  He married later in life after meeting Gladys Clausen of Milwaukee.  They were married December 9, 1968 at First Congregational Church in Port Washington.  Together they resided on Holden Street.

Fred was a 60 year member of the Free And Accepted Masons, Ozaukee Lodge 17 and also belonged to the Tripoli Shrine of Milwaukee and the Scottish Rite.  He also was a 59 year member of Van Ells – Schanen American Legion Post 82, Port Washington.  He enjoyed being with his wife, traveling and golf.

He is survived by his wife Gladys of Harbor Cove and dear friends Jim (Carol) Jones of Port Washington and their children Alicia and Erica Jones.