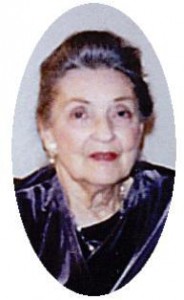 She was born in Port Washington on February 12, 1924, the daughter of Alfred and  Marguerite Thiele Kuhn. and grew up on Garfield Street around the corner from her fathers Pattern Works on Lincoln Avenue. A Class of 1942 graduate of Port Washington High School , she worked for Bell Telephone as an Office Manager.  On January 29, 1949 Dorothy married William “Bill” Koenig from Tomah, Wisconsin at First Congregational Church in Port Washington.

After the birth of their four children, she was a homemaker and secretary to Bill’s manufacturers representative business, Koenig Associates. They raised their family of four children on Powers Street in Port Washington. In the 1970’s, Dorothy became corporate secretary for the auction & appraisal business of David S. Gronik & Co.  Dorothy and Bill enjoyed traveling to Europe and Mexico. And while they spent many winter months in the warmth and sun of Acapulco, she preferred the comforts of her Port Washington home to be with family and friends.  Bill preceded her in death August 14, 1996.

Dorothy had an appreciation for music and the arts at an early age and nurtured that passion with her children. She was a member of Eastern Star, a Girl Scout troop leader, an avid bridge player, and a founding member of the Port Dinner Dance Club.  She loved to sit at the piano and could be heard playing Debussy’s “Clare de Lune” into her later years.  Dorothy’s legacy is one of unconditional love and compassion for family and friends. She was a loving and caring woman who cherished her family above all else. Her home was open to all.  The family would like to thank the staff of Heritage Nursing Home and the Harbor Club in Port Washington, who so lovingly cared for Dorothy after her stroke.