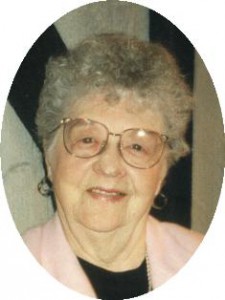 Jospehine M. “Jo” Klemm, age 103, died Tuesday, April 19, 2011 at Sunny Ridge Health and Rehabilitation Center, Sheboygan where she had been a resident the past eight years.  For many years she lived on West Chestnut Street in Port Washington and at the former Marian Heights.

She enjoyed playing cards, especially Sheepshead and Bridge.  She was an avid craft maker, sewing and making afghans for all her family.  She volunteered for many years at the former St. Alphonsus Hospital Ladies Auxilary Gift Shop.  She was an incredible grandmother; admired and truly loved by her grandchildren, great-grandchildren, great-nieces and great-nephews.  She devoted her time to the games, projects and especially the storytelling which will be shared with future generations.  She would entertain both family and friends with memorable events at her home.

A Mass of Christian Burial will be celebrated at 6:30PM Monday April 25, 2011 at St. Mary Catholic Church, 430 N Johnson St., Port Washington.  Reverend Thomas Lijewski will be the celebrant.  Visitation will be from 4-6PM Monday at the FUNERAL HOME with a rosary at 4PM Monday.  Interment will take place at St. Mary Cemetery, Port Washington.  Memorials appreciated.