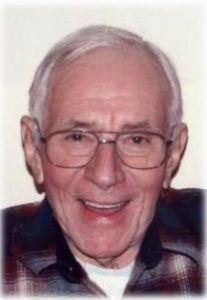 Paul F. Klemens, age 97, formerly of Wauwatosa WI, passed away peacefully Thursday December 19, 2019 at Village at Manor Park where he resided for the past 18 months.
He was born in Milwaukee, WI on September 18, 1922; son of Paul A. and Anna Marie (Sperl) Klemens. He was preceded in death by his mother and father, partners in crime James Fatigati and Eddie Schlass; brother Jerome and his wife Mary. Also, preceded in death by his many brothers-in-law and sisters-in-law, friends, card game partners, RV caravan comrades, neighbors and special friends.
Paul graduated from Rufus King High School. He proudly served his country in the Army during WWII in the European theater from 1943 to 1946.
After he returned home, Paul married Annie Fatagati of Milwaukee on April 3, 1948. They raised their three daughters; Laura, Paulette and Saundra and their son Paul. Annie preceded him in death on June 23, 1968.
On June 19, 1971, Paul married Virginia Smith. Virginia preceded him in death on May 15, 1978.
On May 23, 1981 married Gertrude Betz Bouvia. Gert preceded Paul in death on June 28, 2016.
Paul worked for Jack Winter for many years. Tens of 1,000s of woman owe Paul a huge thanks for creating the polyester pants suites they wore in the 1950’s & 1960’s.  Paul left Jack Winter to be the plant manager for Badger, Midwest and Fox Point Outerwear where he worked for several years.  Paul finished his career in clothing manufacturing at Junior House/JH Collectables.
Once Paul & Gert retired from traveling around North America in his motor homes, he picked up a new side gig, PFK Woodcrafts and Downstairs/Upstairs Woodcrafts. Paul spent many of his “retired” years making and selling his handmade wooden crafts every Saturday morning at the Brookfield Farmers Market.  Throughout the years, many couples received his beautiful bowls and cutting boards as wedding gifts.  While “retired”, Paul was president and chief brew master of KO Brewery.
Paul had a very long and rich life; he had a way of touching every person’s life that crossed his path.  If you had the time, Paul had a story for you.  If you needed help, Paul was always willing to volunteer his talents to the cause.  He was ready to help family and friends with any weekend project.
In September 2001, Paul had an acute cardiac incident.  He truly made use of the extra years and considered himself the luckiest man in the world.  A shot of Abergut, a deck of cards, family, friends; Paul inspired many.  He had been a member of the Cudworth-Stenz-Griesell-Smith American Legion Post 449 of Brookfield for many years.  In September 2014, Paul was a proud participant of the Stars and Strips Honor Flight.
He is survived by his five children:
Laura (Terry) King
Deborah (James) Woodham
Paulette (Fred) Yerke
Saundra (Scott) Smith
Paul (Jean) Klemens
Further survived by his twelve grandchildren:
Scott (Joan Konsella) King
Jessa (Stephen) Stoneburner
Jed (Gretchen) Brown
Randy (Penny) Yerke
Ronald (Leah) Loing
David (Sara) Loing
Michael Smith
James (Tracy) Smith
P.J. (Blair) Klemens
Jennifer (Juan Pintor) Smith
Alyssa Klemens
Jessica Smith
Further survived by his eighteen Great-Grandchildren:
Ronni
Jordan (Makala)
Alex
Sam
Adam
Colin
Alissa
Jacob
Evan
Skyler
Olivia
Annadella
David
Isabel
Parker
Ida Pepper
Evelyn
Dominic
One more Klemens on the way
Further survived by his two Great-Great-Grandchildren:
Addison
Kaydan
Further survived by his three God-Children:
Karen Bakus
Gerald Klemens
Debbie Tarmann
Nieces, nephews, other relatives and friends.
The family would like to thank Paul’s doctors and healthcare providers that helped him live a long and happy life. They would especially like to thank the staff at Village at Manor Park for the care, compassion and love they shared with Paul over the past 18 months.
The family suggests memorials in Paul’s name be sent to the Stars and Stripes Honor Flight (www.starsandstripeshonorflight.org).
“Work hard and you’ll get ahead”                                                           “God Bless America, Amen”
A Mass of Christian Burial will be celebrated at 11:00 am on Saturday December 28th, 2019 at St. Pius X Church, 2506 N. Wauwatosa Avenue, Wauwatosa, WI.  Reverend Paul Portland will be the celebrant.  Visitation 9:00 am to 11:00 am AT CHURCH prior to Mass.  Interment will take place at Holy Cross Cemetery, Milwaukee with military honors.