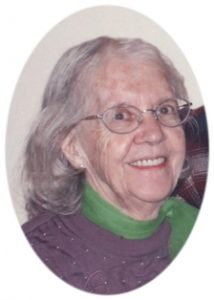 She was born on August 8, 1927 in Port Washington, WI; daughter of Alois and Elsie Scheftgen Betz. Gert grew up on East Prospect Street, attending St. Mary’s School and a graduate of Port Washington High School.

Over the years she had lived in the “Sweet Cake Hill Apartments”, waitressed at Smith Bros. Restaurant, was a dispatcher for the Port Washington Police Department and the first business administrator when Heritage Nursing Home opened in Port Washington in 1965.

When she took a job at Midwest Outerwear in Port Washington, Gert met and married Paul Klemens of Milwaukee on May 23, 1981 at St. Pius X Catholic Church in Wauwatosa. Together they started their journey.

Active with the Good Sam Club, Gert and Paul traveled the country in their motor home. From Alaska to New York, cross-crossing the United States, stopping to see family and friends along the way, the two of them on the road. She and her husband enjoyed sharing the personal crafts they made, playing cards or just staying home. With her travels, Gert became quite the collector of pins and music boxes.

She is preceded in death by her sisters Audrey Russart and Marjorie “Marge” (the late Erin H.) Poole and her brother-in-law Jerome (the late Mary) Klemens.

Special thanks to the Visiting Physicians Association of West Allis and Grace Hospice for the comfort and care.