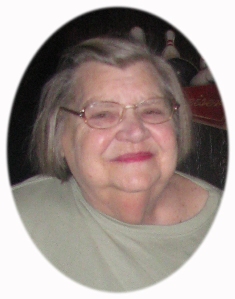 She was born on November 28, 1938 in Barronett, WI; daughter of Louis and Frieda Kend. She grew up in Menomonee Falls, marrying Harold W. Kidd, originally from Tacoma, Washington, in Milwaukee on October 27, 1956. Together they moved to the town of Port Washington and raised their family.

Eleanor was a homemaker, later working at Leeson Electric in Grafton. She was a proud grandma, keeping busy crocheting and doing needlepoint. She enjoyed other crafts, reading western novels and stories of the history of the West. She seldom missed a horse race on television. Political issues of the day always brought out a lively discussion. Harold preceded her in death on November 9, 2001.

She is survived by her children Coleen (James) Steffen of Grafton and Mark Kidd of the town of Port Washington; grandsons Christopher and Kyle Steffen, sisters-in-law Frances Bennet of Graham, WA, Donna Smith of Spanaway, WA and Joanne (James) Paterson of Redmond, WA; brothers-in-law Carl (Dorothy) Kidd of Lewistown, MT and Ralph (Ann) Kidd of Brinnon, WA, nieces, nephews, other relatives and friends and her dear pup Rowdy.

She is preceded in death by her husband, her brother Harold Kend and brother-in-law Jack and his wife Rosalie Kidd.